The Toughest 48 Hours in Sport 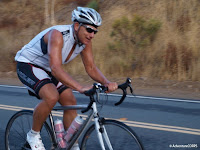 I met Tim Marks last February, at the AdventureCorps event in Death Valley. Tim's wife, Jill, and I rode together a lot (including the Century ride) while Tim went off with the other hammerheads, racking up the miles and riding their bikes as if they were stolen, and on fire.
Tim just recently completed the infamous Furnace Creek 508, a hellacious ultramarathon bike race. This post is his story, in his own words, along with some photos taken by his crew.
Congratulations, Pileated Woodpecker!
508 Recap

Fri, 8 Oct 2010
I've been home for 4 days since the end of the race. My hands are numb, my feet hurt, & my ass has gone from Home Depot "orange" to dead skin. Was it worth it? Hell yes.....I can't wait until next year. Any takers for a relay team?
It all started last Friday with racer check in & inspection of bike & support vehicle. All went "A - ok". Had a pre race meeting highlighted by Bill Walton sitting in a chair next to me. The next morning - was up at 3:30 for a 7:00 AM start - surrounded by world class athletes - very intimidating! And - off we went.....
First stage was very difficult but I held my own. Feeling good - it was overcast, calm winds, but humid. Second stop - was Trona, CA - the armpit of the world. The American Dream has definitely passed it by.... I asked Jill what place I was in, thinking I was in the top 10, and found out I was in 43rd. Demoralizing. Arrived at "Trona bump" which was mtn climb #4 (which kicked my ass) and we put on the lights.
Made my way to Townes Pass - the toughest climb on the route. Climb started at the 205 mile mark. Had been off the bike less than 5 minutes in that time. The 9% incline started. I passed one of the superstars on a fixed gear bike - he was walking. It got in the back of my head - if the superstar is walking, I SHOULD BE WALKING. Sure enough - as I was walking up the incline in my carbon fiber shoes, up comes Bill Walton telling me to put on my Air Jordans and take a break! So I was WALKING and it was STILL kicking my ASS. The hour climb took me 2 hours.
Took the 17 mile descent into Death Valley where the temperature was between 86 & 92 degrees between 11 PM & 6AM. After the Furnace Creek time check (#3) I was doing everything possible to get off the bike instead of staying on. I took a 15 min nap at 4 in the morning and took the 10 mile climb at 5% up out of Death Valley. After a minor diarrhea episode I was greeted with blazing sunshine & 30 MPH headwinds. Temp on my odometer rose to 106 - maybe 99 or 100 on the car. Oh - and did I mention there was fresh new black asphalt on the road too?
Made it to #5 time check in Baker (3, 4 & 5 just blended together) with 130 miles left. I had been listening to my wife tell me for the past few hours that I can't quit - get my ass back on the bike....she was actually yelling at me after 29 years of marriage! So off I started on a 21 mile climb, at a 2% consistent grade on a smooth road with light 10 MPH crosswind.
At the top, the road turned into something I have never seen, and I'm from Minnesota. It was like hardened dirt with 1 inch diameter rocks thrown in for good measure. It was about 13 miles downhill at up to 4% grade. I got 1/2 way down and had dry heaves & diarrhea (I never want to drink Hammer Perpetuem & Heed again). My crew came up with a hot cup of noodles & chicken broth and my race became almost fun.
We come to the bottom of the incredibly poor road at time station #6 in Kelso - with a train blocking the road. The train passed quickly & after the check in - started climbing Mt. section # 9. It was a 12 mile climb which didn't matter because I could not see - it was dark again. Lights went on the bike again - demoralizing 2 nights in a row.
But - my fortunes turned & I was unstoppable. I passed more people than I could keep track of - I was on fire. I could smell the barn, with 80 miles left. Made it to the top of that climb, with a long descent - into Amboy time station #7. I was in an incredibly good mood.
Last stage, another long mountain climb and I was still flying, passing more people, enjoying the view, dreaming of getting my jersey. Then the hill got steeper & steeper & steeper & it would never end - but, it did. Another long descent and my ass started to burn like never before in my life. 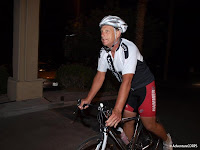 Only 25 miles to go, but of course, it was up hill. You can see the lights of Twenty-nine Palms forever - you think you are done - but it goes on & on & on uphill. I get into town and encounter the steepest grade of the whole course. I swore, laughed, and remembered Scott Busse telling me I would be "God-like" in his eyes if I finished the 508. I was going to finish! 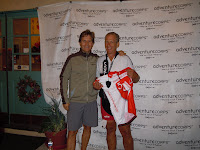 I crossed the finish line, got pictures taken, received my jersey, and my wife told me to carry my luggage AND my bicycle up 3 flights of stairs to our room. Is that any way to treat a GOD? 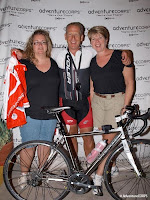 So now - its time to wrap this up. Let me end by saying I could not have completed it with out Jill & her cousin Torie. They kept me hydrated & chewed me out at the right times. The support of friends & family was a huge motivator and was much appreciated. More details available upon request - I have a lifetime of stories after 44 hours on that bike!