Side Trips: Cleveland's West Side Market 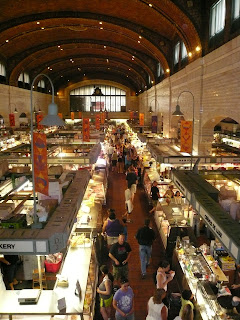 The Akron Bike Club holds a group ride to the West Side Market every year, starting in Peninsula or along the Canal Towpath Trail.


Jackie and I joined up with them at the Canal Visitor's Center with our mountain bikes, outfitted with trunk bags and panniers to haul some of the Market's offerings home with us. 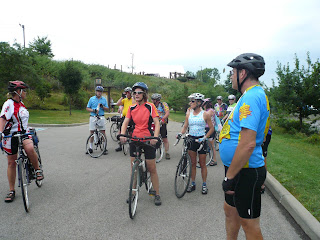 The West Side Market on a Saturday morning is a  feast for the senses. The outside aisles are packed with produce of every variety. And the vendors are often as colorful as their wares! 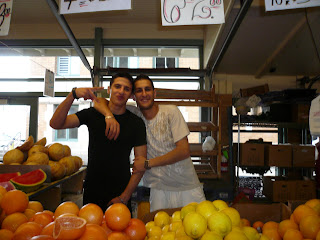 Inside, you'll find everything from fresh meat, cheese from all over the globe, ethnic specialties, bread, bakery - you won't go hungry. 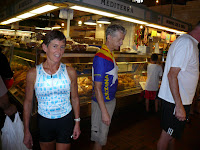 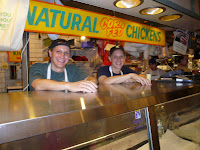 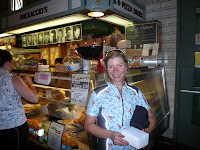 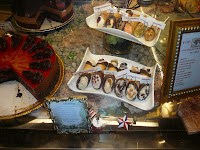 Posted by Cyclophiliac at 6:16 AM No comments:

The Power of Yellow 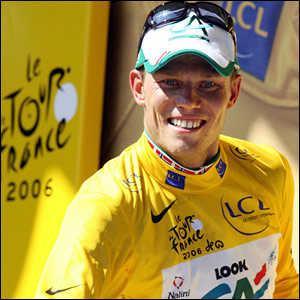 No one who follows pro cycling and the Tour de France would have ever predicted Thor Hushovd holding the lead for 7 days. He's a fine sprinter and time trialist, of course, but it's not as though those 7 stages of the tour were tailor-made for Thor. He held onto the lead even when the stage route was decidedly un-Thor-like, such as when the route headed for the mountains.

It was almost as if he was endowed with some sudden superpower, at least for a while. And truly, he was: he was riding in the yellow jersey.

Something about riders wearing that thing seems to give them a surge of invincibility. There's a definite mind-over-matter effect to the bearer of the highest daily honor in the Tour de France.

The yellow jersey is the Ring of Power. It's Samson's hair, it's the Ark of the Covenant, it's Elmer Fudd's magic helmet in What's Opera, Doc.

That's a tall order for nothing more than about a yard of fabric.

I like to think that, if such a humble article of clothing could impart so much confidence and strength and courage, certainly other seemingly insignificant things can do the same.

Here's my question: Is it all in what the thing itself represents (like, does the world have to know or care that this object is to be awed and admired?), or is it only about what it means to the bearer?  Does the One Ring get its power from the mythology built around it, or from the mythology that resides in Frodo Baggins's head?

I think that both are right, but the latter is more significant. And so I decided to test my theory.

For the Tour of the Valley race, I did up my nails in Snakebite colors*, as a way of showing my team loyalty,  and to keep my race hopes and dreams right there at my fingertips, as it were.
*I don't 'do my nails', ever. I can't be bothered, and besides, I use my hands, so it's such a waste of time.


Did this subtle but power-attracting act deliver me to the podium? No, but every time I glanced down and saw my garish black/orange/blue fingers curling around my aero bars, my TT-induced suffering seemed to diminish. Just a little.

I honestly think that there's something to all of this, and that the whole notion simply begs for experimentation. After all, it can't hurt, right?

So, I'm gonna consider bearing my own cycling talisman with me on my next ambitious ride or race. And I'm gonna bet that some of you are already carrying your own 'power sources' around with you,  either on the bike or in everyday life.

What's your yellow jersey?
Posted by Cyclophiliac at 9:23 PM 5 comments:


This blog and I have been silent lately, and so this post is meant to explain away the past month.

If you follow this blog, you know that I joined Snakebite Racing late last year. And then you also know that team members are required to accumulate race points based on participation in order to remain in good standing.

I've been doing a lot of racing lately, and the most logical blog post would be a race report. But I just think that race reports can be rather dull. They're mundane to write, and boring to read. Besides, if you really want to know about my races, you can always check the Snakebite site.

I wasn't sure if I'd be motivated to race enough to maintain team status, but planned to give it my best shot and then decide later if I thought it was all worth it.

So far, this is what I've learned:


Life is a balancing act. There are all kinds of competing interests (and disinterests) vying for time and attention, and not enough time in the day. But summertime in northeast Ohio is frustratingly short , and so I'm OK with postponing other interests in order to take advantage of warm weather and sunny days for cycling.
So, that's my excuse: So many rides, so little time.
I'll post more after next week, when the bulk of my summer race schedule will be behind me. Until then, look for me on the roads!
Posted by Cyclophiliac at 9:07 PM No comments: