Going back to start 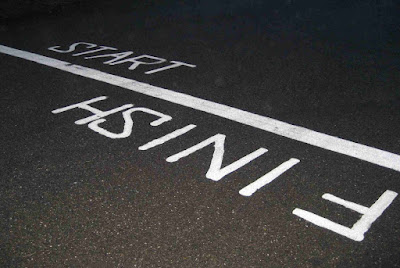 It's my firmly-held belief that life is all about finding happiness.

This is all just one grand experiment to try and to test, to uncover and explore, to seek out those things that connect us with the joy machine that makes life a worthwhile endeavor.

But when a channel that has always brought that spark suddenly doesn't, it time to change the channel.

That's what happened to me and my bike. I could say it was a recent realization, but that's not entirely true. Only very recently have I been able to admit to myself that my bike life was no longer doing it for me. It probably started sometime last year, or maybe even before that (I can blame long, cold Ohio winters, too). At some point, the bike began to feel less like play, more like work.

To be fair, it's not 'being on the bike' that felt like work. The bike, as Mandy Marquardt so aptly described, is my Happy Place. The part that was bothering me was the stuff surrounding and leading up to that moment of pedaling off into bike bliss; namely, the expectations and commitments I built around cycling, or at least the perception of their ownership of my life.

Even as I approached the finish line at Worlds last month, my motivation was at an all-time low. I absolutely knew that it was time to take a break. Not from the bike, necessarily, but from bike racing.  I had devoted a huge part of my life to this. I had pushed myself to levels I never thought possible. Early on, I did it because I wanted to prove to myself that I could. I wanted to be epic, to HTFU. I think lots of competitive athletes think the same way. We do it for the victory over our own limitations, and so we're constantly pushing those limitations. We work hard, set goals, suffer to achieve them, and then set new goals.

But the new goals were starting to feel like recycled old goals. The same races, the same field of competitors, the same courses, lots of the same bullshit. It kind of felt like I had been doing this too long, and that something needed to change.

It was hard to admit - to myself and anyone else - that I was ready to walk away for a while. I had defined myself by this sport. But I was beginning to acknowledge that my expectations had changed.

I appreciate the encouragement of well-meaning friends: "You'll be back in a couple of months",  or "you'll be ready for CX". But those are their expectations. Mine aren't so time-dependent. I'll be back when I can return with a totally new perspective. Or at least a renewed sense of joy for it.

You might wonder what I plan to do now. For the record, I don't plan to sit around on the couch watching Game of Thrones all day (tempting, but no). I don't plan on resorting to Pokemon Go to get myself out of the house. Ironically, I've been getting out more but doing things that bring new challenges and excitement. Trail running, for one. Mentoring the gals on Team Stelleri. Riding in fast little circles, and bringing in new riders, at the Cleveland Velodrome. Running sprint intervals in the mornings, before work (something I used to do quite a bit, and found out lately how much I missed it). I even went mountain biking the other day, on the Bedford Singletrack, and, guess what? I didn't die, nor did I fall off any bridges. (It was a bit outside of my comfort zone. I'll be back.)

And, of course, now I'll have more time for my favorite thing in the whole world: long, solo rides to unfamiliar destinations, with no other goal but to get out and get lost for a while.

I can't imagine I'll ever really lose my desire to ride a bike. (There are too many bikes littered around the house  for that, and they all need my attention). Sooner or later, I'll probably be lined up again at the start of some race, raring to go.

In the meantime, I'll find happiness in trying to figure this all out.

Posted by Cyclophiliac at 6:28 PM 2 comments: