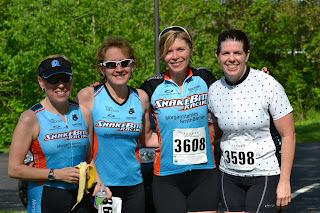 Michelle, Nancy, Me, and Jackie, post race (Nordonia)
My two favorite duathlons - Nordonia and Twinsburg - are now history.
Nordonia Duathlon Race Report
Nordonia is a low-key event. It's not sanctioned, so it brings out racers of all levels, from newbie to seasoned. Last year I finished in 1:13:something, which put me into 2nd place overall but I wanted to do better this year.
I started the run kinda fast, because Nancy and Michelle from Snakebite are fast runners and I made the mistake of starting out with them. All the while, I'm telling myself to slow down to a more sane pace, there's still too much race left to burn myself out in the first mile. I'm not a great runner, but I was hoping to maintain a 7:30 mile.

I got into the transition and scrambled to get on the bike. The course is 2 laps of a 5-mile loop, complete with a nice climb up Valley View Road in the middle. I like climbs. The first time around, I got into my groove and kept up a steady pace, and was able to pass a lot of those fast runners. The second lap up that hill, everyone was petering out a bit, so I threw it in low gear, cranked up the cadence, and finished near the front to begin the last run leg.

And then I was done. My tank was on "E". My legs were concrete, I was gasping for breath. After ascending to the paved trail, I had to walk about 20 paces just to catch my breath and convince myself that I could run some more. At that point, a girl I passed on the bike now breezed past me, but I had nothing - nothing - in me to respond. It was all I could do to start running again, and keep her in my sight to the finish.
I didn't know that up until she passed me, I was the female leader! Oh well, even had I known, I couldn't do anything about it.

I finished #2, but my results showed that I had the third best time on the bike overall, including all the guys! I'm really pleased about that, but I wish I could run better. My time was 1:10:18, better than I had hoped. I won a ceramic coffee mug.
Jackie did great - almost 6 minutes faster than last year. And she chalks some of that improvement up to the training she did over at Ohio Indoor Cycling all winter.
Twinsurg Duathlon Race Report 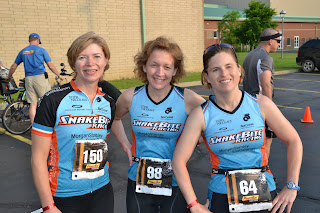 Me, Nancy, and Angie cool, calm, and collected before the Twinsburg Du
Lots of Grunt Girls and Snakebite teammates raced today, which made this one a lot of fun.
In a nutshell, my race was nearly identical to the Nordonia event (good first run, great bike leg, petered out and had to walk a bit on the 2nd run leg - what the hell???). And, as in that other race, I took a second place finish.

This was a little strange, though: I was actually the fourth woman to cross the line, with Angie crossing scarily close behind. I thought for sure I won age group (and Angie won hers, too), but the final results showed that women #2 and #3 were penalized for some transgression (choices: drafting, blocking, or wearing earbuds on the bike).
Since I was bumped onto the podium, Nancy (who had her rotator cuff fixed over the winter, but seems to not have lost any fitness because of it) took first in our age group.
I finished in 1:04:46, which is way better than I had expected, given last year I finished in 1:10:36.
Grunt Girls Andrea, Kim, Stacy, Beth, Pam, Paty - who else? there were lots! - all ran great races, too, and some of us met up at Fresh Start Diner for a celebratory chow down.
Posted by Cyclophiliac at 8:25 PM No comments: