I know better than to completely rely on the forecast, but this is discouraging. I may alter the plan just a bit, because tomorrow is supposed to be reasonably nice.

Tomorrow's ride - the last before the Hell's Gate Hundred - travels along the same route as for the Century, but doesn't ascend beyond Hell's Gate. If I continued beyond Hell's Gate tomorrow, to Daylight Pass, it's only another 12 miles to Rhyolite. I'm figuring I'm not going to make it to Rhyolite on Saturday, so tomorrow is my only option.

My plan is to start an hour earlier than the rest of the group, in order to take advantage of the planned SAG stops at Hell's Gate, the turnaround point. Other riders have expressed their desire to ride more miles tomorrow, too, so there may be another SAG parked at Daylight Pass, which would help me out a lot.

Wish me luck! I hope to be able to send pictures from Rhyolite tomorrow, if all goes as planned... 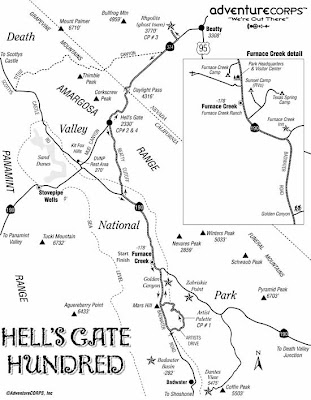 Posted by Cyclophiliac at 12:18 AM No comments:

The Company We Keep

The first night of CorpsCamp includes a group  dinner at the Furnace Creek Inn, where we meet our fellow cyclists and reconnect with old friends.

This is my second CorpsCamp, and I'm always struck by the variety of the participants it attracts. Most of us are over 40, some significantly so, some a bit younger. All shapes, all sizes - but mostly very fit, very determined people.

In fact, Dave and I are quite ordinary compared to our CorpsCamp friends. We're both enthusiastic cyclists, for sure. But those around us, including the ones sitting around our table at dinner that first night, are  exceptional.

There's Georgeanna and her husband Grayson, both ultrasport athletes from Florida. Georgeanna is an ultra runner and has crewed for the Badwater Ultramarathon twice. She paced one of the runners during the race: 4 hours in 127 F heat. (We would see her the next morning, arriving in Stovepipe Wells, looking fresh after running the 25 miles from FC Ranch. She would soon turn around and run back to FC, then ride with us the next day).


Then there's Chris, who we met at last year's Spring Century. (Chris actually finished that ride under his own volition, unlike me, who finished it in a car.) Chris is a regular bike commuter in his hometown of Toronto. He's also an Ironman Triathlete, and a participant in Race Across the West (part of RAAM). Oh, and he turned 60 a couple of weeks ago. And his dream is to someday run the Badwater Ultramarathon.

Of course, you already know about Tim Marks if you read this blog. And you certainly know about Jill, a super strong rider in her own right, and Tim's 508 Crew Chief Extraordinaire. Her determination is at least as remarkable as Tim's. She logs his miles, schedules breaks, coordinates the crew, turns into a drill sergeant when required. She makes Tim get back up on his bike when he appears to be faltering. In other words, she makes sure he across the finish line (twice now, soon to be three times as of this October).

The SAG staff are all 508 finishers or crew, and even the organizer, Chris Kostman, is an accomplished multisport athlete many times over.

Other riders talk about their cross-country trips on recumbents, their rallies across entire states, their race histories and miles logged in one year. Some of them talk about ordeals that they bring upon themselves in the name of sport, that I don't even have the space in my brain to understand. Certainly not the mental whatever-it-is that permits somebody to do these things.

Like I said, Dave and I are possibly the most 'ordinary' riders here, but it's always enlightening to be around  people who hold such high ambitions. In the meantime, I think maybe I can learn a little about believing in the impossible, and making it happen.
Posted by Cyclophiliac at 12:02 AM No comments: 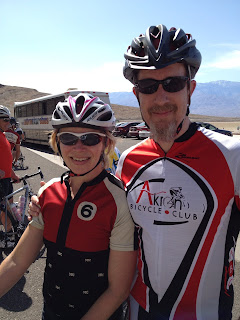 Tuesday, March 27, 2012
This afternoon, the AdventureCorps group met for our first ride: 36 miles to Badwater and back.

Badwater is at the lowest elevation point in the U.S., and often also registers as the hottest.

From the parking lot at Badwater, you can wander out a bit over the salt pan on the boardwalk over any brackish water that hasn't yet evaporated. Turn around and look up the mountain that runs alongside Badwater Basin, and way, way up the rock wall you'll see a sign, small in the distance, that reads 'Sea Level'. 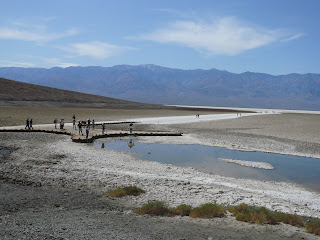 This is where our ride stopped to re-group and turn around. It is also the place last year where Jill and I ended our fateful Ride from Hell (AKA Death Valley Spring Century 2011).

The roundtrip from Furnace Creek to Badwater and back really isn't that difficult (although I would say that last year, the ride back to FC was impossible for me and Jill). And today it wasn't so bad, just a light breeze. The one thing that brought it all back to me, though, was the heat: full sun blasting in the  mid-afternoon, sun high overhead. Now I remember why this whole thing can be so HARD, at times.

Things I have to remember: 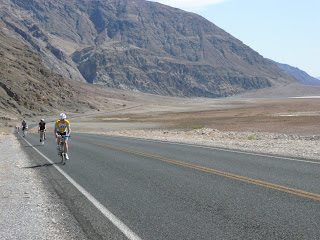 Posted by Cyclophiliac at 9:37 AM No comments: 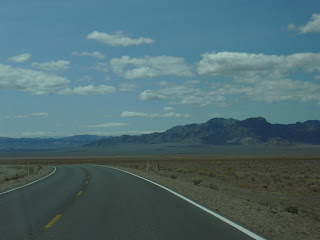 200 miles (and $22.95) later, we're back at Furnace Creek after hauling our bikes back to Las Vegas and the crack mechanic team at McGhies.

Because of the non-stop action that is AdventureCorps, I'll be posting in batches, when I finally get a chance to stop riding/yoga'ing/eating/socializing.

My first 'unofficial' ride was with Tim Marks. He and Jill had just arrived from their 2-day megadrive from Minnesota to Death Valley. An hour later, he was on his bike and circling the parking lot like a hungry shark, itching to ride. Jill wanted to unload their week's worth of supplies and then take a break. So I agreed to ride with Tim, but just up to the entrance to Artist's Palette Loop, a roundtrip of about 20 miles.

The day we arrived was cool and windy, and I wasn't feeling the love from Death Valley. Today was different - cooler (maybe high 70's), sunny, and very little wind. Not often this happens, I'm sure, but it was  perfect for the inaugural ride.

Nevertheless, riding with a 2-time Furnace Creek 508 finisher is a bit intimidating, and so I rode out harder than I probably needed to or should have. I figured Tim's average pace was somewhere between 'rather aggressive' and 'beastly'. I was not disappointed.


Getting back out of on the road in DVNP is a surreal experience. There are many ways to describe the landscape, but the most appropriate is 'vast'. In seconds, a cyclist disappears behind a backdrop of massive mountains, a blip on the screen of expansive salt pan. Sort of the perfect accompaniment for the power display that Mother Nature likes to put on, throwing everything at you: wind, heat, blasting sun, freezing nighttime temps. Be ready for anything.

Tuesday is the official start of AdventureCorps camp. More to come..
Posted by Cyclophiliac at 9:19 AM No comments:

We're off to a rather shaky start. Made it to Death Valley National Park alright, but the bikes weren't so lucky. They arrived earlier this week, but not as intact as we would have liked. We're using our new BIKND (I think that's how it's spelled) bike carriers, which were expensive and seemed to be a clever, sturdy design. We trusted our bikes to them. 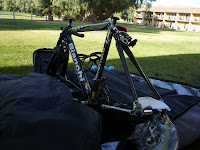 That was a mistake. I was anxious to see my Bianchi, and the first thing I noticed when the bike bags were brought up to us was that the inflatable sides didn't seem to be so inflated, and one of the carrier's wheels had sheared off. I was afraid to open it up, but nothing was seriously wrong with the bike. But when Dave put it together, the derailleur wasn't functioning properly. It looks as though it may have been bent, but we don't have the tools to fix it well enough to hold up to a week of intense riding.

Dave's Cannondale fared worse. His derailleur also appears to be slightly off-kilter, but he couldn't really know for sure since the derailleur hanger was completely sheared off.
So instead of a leisurely, pre-AdventureCorps ride tomorrow, we'll be driving back into Vegas, to our favorite bike store there (McGhies) to get our bikes repaired. I'm not shipping my Bianchi home in that piece of shit BIKND, either. I won't trust my bike to that thing, especially since we're shipping and not flying with the cases.

Oh - and the wind gusts are expected to reach 40+ mph  tonight. And rain tomorrow...but I know not to be surprised. You have to always expect extremes here in Death Valley. I just hope that this first day isn't some ominous sign...
Posted by Cyclophiliac at 11:29 PM 1 comment: 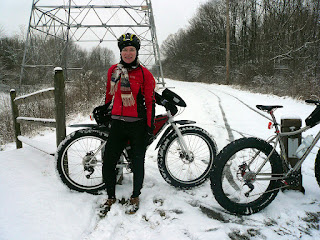 To say that I've endured Dave's snowbike obsession these past few months is truly putting it mildly. Since last fall, I've had to navigate around assorted fat bike parts that have been occupying my living quarters while he built his custom titanium snowbike. Along with the Pugsley he bought last year, that means we have not one but TWO extra large bikes taking up too much space in the house.

Part of my frustration with this whole thing is that I just didn't get it. I mean, who in their right mind would ride in deep snow and freezing temperatures for fun? And with the mildest winter we've ever had here in northeast Ohio, the whole business seemed to me a serious waste of time.

But then we had a mini-snowstorm last Sunday.

I was watching the snow come down, looking for an excuse to blow off my indoor trainer workout.  I was having a really hard time generating the activation energy to overcome my resistance to the 2-hour workout that my plan called for. So when Dave announced he was taking his Carver out for its inaugural ride, I immediately invited myself along. 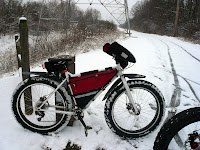 I adjusted his Surly Pugsley to fit me, threw on some winter gear, and we hit the snow-covered road. Luckily, the forecast called for a warm-up by the next day, so the road crews weren't too concerned about plowing. With our big fat tires, we were able to navigate the sidestreets just fine, and when we got to the Hike and Bike trail it was like riding in a winter wonderland.

For as big and fat as the snowbike is, it really felt effortless to ride. Of course, we weren't going all that fast anyway, and the trail is pancake flat. But there was something about riding through snow-globe flakes that just felt like the coolest thing in the world, in a way that riding on a windtrainer in front of a Tour de France DVD doesn't.
Riding along a snow covered trail is almost meditative. This wasn't a 'workout' by any means, but that didn't matter. I was outside, on a bike, riding through a late-winter flurry - and I was loving it.
So, I'm happy to say that now I kind of get it, the snowbike thing. I don't know if I'm ready to move to Minnesota or start using words like "Iditabike", but I kind of hope we still have some winter weather left before the charms of spring awaken...

Posted by Cyclophiliac at 7:40 PM 3 comments: