It was bound to happen sooner or later. I just didn't think it would be THIS soon.

After what seems like years of turning down Tim Marks' (Pileated Woodpecker) suggestion that I race the 508 with him as part of a relay team, I have finally succumbed. Tim and I will be racing as a 2X team in the 2015 Silver State 508 (totem TBD, stay tuned).

My head is spinning, but that's OK. I know better than to try to overthink decisions like this, especially after my mind is made up. After all, I'm now committed - in every sense of the word. The timeframe has suddenly become very, very abbreviated.

My life is truly dictated by endless harmonic convergences, maybe because I'm willing to open myself up to opportunities. And when they come around, I grab hold.

A few years ago, I learned to surf off the warm waters of Maui. I was fascinated by surfing and the surfing mentality (after reading 'West of Jesus', a book that has altered the path of my life). Surfing was everything I expected it to be: challenging, exhilarating, frustrating, salty, and wet. What I didn't expect was how it proved to be so allegoric. There were lessons I learned from surfing that have endless value on dry land.

First, surfing requires a lot of waiting, and watching. The four of us in my little group would paddle out to where we could see the waves begin to break. For the most part, we sat around on our boards, talking and laughing. We watched the horizon, looking for the telltale white foam that meant the ocean was coming up to meet us.

Second, surfing requires you to be ready. We would take turns, one after the other. When it was my turn, the others would back off and let me do my thing.  At that point, it was just me, and my board, and that wave.

I would wait for the wave to get closer so I could set myself up to catch it.  I would paddle out to meet it, turn my board toward shore and, if I timed it right and paddled hard enough, I would be where I needed to be just as the ocean began to lift the back of the board. Then it was all about letting the momentum of the swell propel the board so I could find my balance and stand up. When all the pieces fell into place, I would ride that wave gracefully toward the shore.

But the point is this: When it's your wave, you ride it.

So, yeah, I'm in for the 508 this year. I've watched, and waited, for the moment to present itself, and now it has. This wave is mine, and it's big and it's scary but it's mine and I'll ride it. Tim and I, we're gonna own this thing.


Other posts that feature Tim (WAY too many, but here they are):

(Yes, this is bordering on ridiculous...)


Posted by Cyclophiliac at 9:10 PM No comments: Links to this post 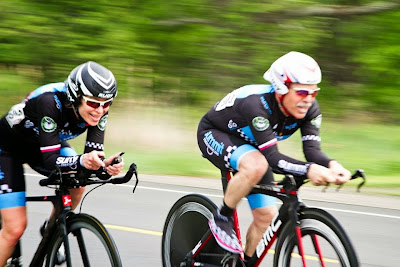 That was Phil Liggett's description of the Team Time Trial, during the Tour de France some years back. I kind of like the idea of sharing the pain with a teammate. After all, what are teammates for?

The Eastern Ohio Time Trial series has become a favorite. Every third Sunday from May through September, those of us who crave the Race of Truth show up to teeny Deerfield, OH, for a blissfully short morning of racing.

The cool thing about this series, aside from it being probably the most low-key race in NE Ohio, is that you can race practially any category you want to: standard class for those without aero equipment, single speed for the truly hardcore, tandem, even stoker/kid. If you wanted to, you could probably enter in a Fat Bike class (and I know somebody just crazy enough to try this).

I like the Individual (ITT) and Team (TTT) races. I've raced the TTT in prior seasons with another teammate, and that was a great experience. This year, I figured I would try to introduce more teammates to the joy of time trailing. I challenged my teammates: I would race the TTT every month, but with a different person every time. Any takers?

For the race in May, my first taker just happened to be the super-human speed machine, George Liolios. Although I'm sure our race was the slowest one he's ever done, it was a memorable race for me (George is one of my cycling heroes). We decided on a team strategy and stuck to it through the entire course, and I have to admit that the last charge to the finish nearly killed me. 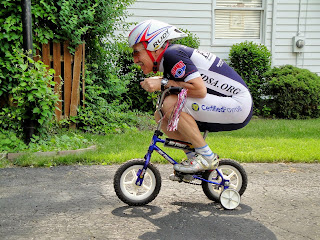 Tomorrow, I get to race with Uber-Track Maven Beth Rowell (AKA "Miss June"). I can't wait!

And the rest of the Team Line-Up:

Posted by Cyclophiliac at 4:16 PM No comments: Links to this post