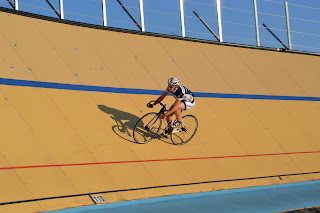 I was back out at the track last week, the first time since that unseasonably warm day after Thanksgiving (forever after to be known as 'Track Friday').

And I have to admit this: I was afraid. Being away from it for so long, that pitched turn seemed ridiculous. I would have to re-learn how to ride a single speed bike with no brakes. I would be up on that track with a lot of other people at the same time, something that I usually try to avoid.

I was at the Cleveland Velodrome to take the first of my Track 201 classes (three are required to be eligible to race on the track, and I want to race on the track). The class is meant to teach you how to ride safely with others on the track, either in a paceline, or in passing. Riders above and below me, side by side, scare the crap out of me.

Tim from North Coast Endurance teaches this session. He's patient and persuasive, which is what I needed that day.  Teammate and Track Goddess Beth was there, always a breath of fresh air. She's at the track more than anyone I know, and has inspired me to become an advocate for the Velodrome. She's a confident, graceful track rider. Her enthusiasm for riding fast in little circles is contagious. My day was looking better already.

I have to admit that, going into Tim's training, I was ready to bail when things got a little hairy. Some of the training exercises weren't even in the same room as my comfort zone.

I carry around with me a little piece of paper, something that I pulled out of a fortune cookie years ago.  I've memorized it, often using it as my mantra: "Do the thing you fear the most, and the death of fear is certain."

In spite of my hesitation at what we were being asked to do, I decided that I would at least try. And so we worked on pacelining, passing on the rail, riding 2, then 4, side-by-side. We did standing starts, in which you have to pour on the power immediately so you can get through Turn 1. We did lots of things I didn't think I'd be able to do, but I did.

When the class ended, I hung out in the infield for a while with Beth and other friends. Whatever dark cloud followed me to the track was nowhere to be found. What was left was this feeling of peace and calm, and satisfaction. It was a potent endorphin high that lasted for days.

Cycling is a psychological outlet for me. I've ridden away so much stress and anger and sadness, and bullshit, over the years that I'm starting to think I should write my bikes off as a medical expense. Most of it comes simply from the physicality of the sport, the hard efforts that require focus and attention and the ability to let everything else go but the ride.

But, clearly, there's something about the Velodrome - about riding those tight little circles, about hanging onto the top of that wall - that seems to be a direct line to Zen. I tell everyone that the Velodrome is transcendental, riding the track is sublime.

Next time you need a mood-altering experience, I suggest skipping the fleeting benefit of a massage/spa day, spare yourself the time (and effort) of yoga or meditation, save your cocaine money. Come ride yourself into inner peace, 1/6 of a mile at a time.