Update on the stolen Bianchi

Actual text message conversation (from this past Monday) between me and Beate:

Beate:      My bike just past me! Was too slow to catch the son of a bitch. Waiting now again for the police...

Beate:       I was pumping gas at my ghetto gas station and my bike passes me...

Beate:    He was rocking his pink polo shirt on MY BIANCHI! At least he tries to ride in style.

Apparently, there was another guy riding with pink polo bastard. He stopped when he saw Beate running toward him and screaming 'he stole my bike!'. The guy claims he doesn't know Pink Polo (just ran into him today, as a matter of fact), but if he sees him, he'll give him a message from Beate: Return my bike by tomorrow, I won't get the police involved, and I'll give you $100 if it's not damaged (although apparently the guy was riding it with a flat rear tire.)

Later that day, she got a phone call from the non-thief (well, not the thief who stole her Bianchi, anyway), saying that he miraculously found Pink Polo. Beate restated her offer, leaving out the part that if she ever catches the MF'er in her neighborhood again, he will be unable to ever father children. I told her she was probably too late for that.

And this text, received last night:

Beate:     I'm gonna meet the son of a bitch tomorrow at 3 to get my bike back! Yeah, the Bianchi comes home!

Posted by Cyclophiliac at 2:27 PM No comments:


Sometimes, after lots of weeks of racing and training for racing (and more of that to look forward to), the best thing to do is just go for a ride with friends to get ice cream.

Posted by Cyclophiliac at 1:52 PM No comments:

Have you seen this bike?

Last seen on July 3rd in it's garage in the Gordon Park area. 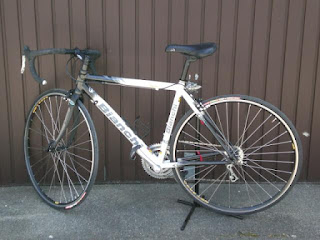 Posted by Cyclophiliac at 9:32 PM No comments: