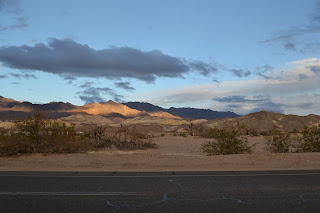 The good news is that the rain and cold that was predicted for today must have been canceled, because we woke up to clear skies and mild temperatures. That's all for the good news. 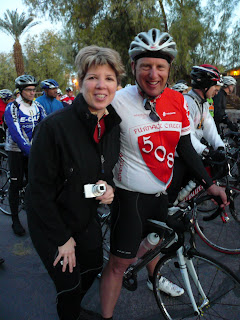 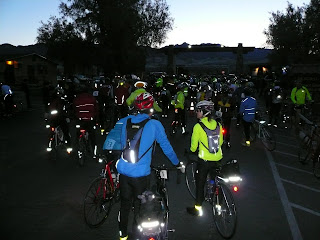 Dave and I got out in time to watch the 200-mile riders go out.We especially wanted to cheer on Tim, who was sporting his 508 jersey for his return engagement to Death Valley. It was so exciting to see the group take off in twilight, especially after hearing Chris Kostman's pep talk: "If it's snowing on Salisbury Pass, think about turning around." YIKES! 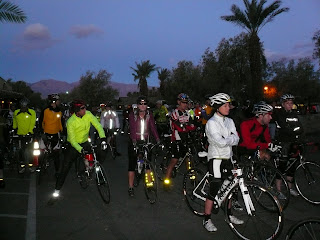 I was nervous. After Tim left, Dave wanted a quick breakfast, but I could barely choke down an English muffin. I was ready to go right then and there, and had my bike loaded and waiting outside the cafe. Dave had to run back to the room for his bike (he wasn't nearly as concerned about this day as I was). In the meantime, I took my place in line, and waited for Jill to come up. She looked as anxious as I felt, but we reaffirmed our commitment to this ride and to our ability to have some fun with it.

The countdown began and we were off. Dave missed us by moments, although he claims he saw us making the turn out of Furnace Creek Ranch, and directly into the wind.

This wasn't completely unexpected. But the force of it this early in the morning took us a little off guard (it wasn't yet 7 AM). 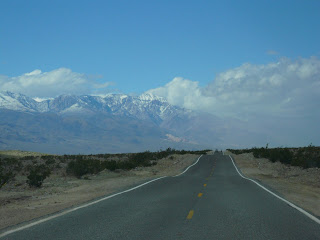 It didn't feel good at all to be back fighting a headwind. We struggled. I wondered which was worse: a killer headwind during the first half of the ride, or the last (like last year). I was to find out that there was another option I hadn't considered, an option that trumped the other two.

The route to our first checkpoint at Badwater is mostly flat with a few long downhills. It took us 2 hours to go the 17.7 miles. That was NOT a good omen. 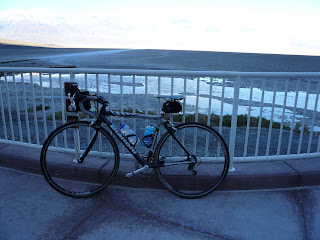 Here's what is tough about a strong, steady headwind:The only bright spot in this entire exercise was the anticipation of the fast 4-mile descent from Jubilee Pass, followed by the delicious tailwind on the return trip.

This thought is the only thing that kept us going. There were at least a couple of really, really hard stretches where I didn't think I'd be able to continue to the next checkpoint at Ashford Mills (mile 45.4). 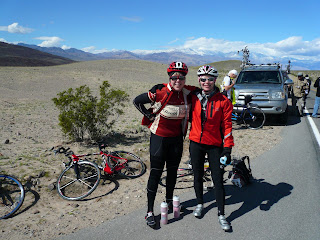 But we made it, although Jill and I were both pretty burned out and cranky by then. It was good to stop, re-hydrate, pop some Endurolytes, take a break from our sustained misery.

The turn leading from Ashford to Jubilee was almost windless, it seemed, and I attributed that to our direction of travel and increased elevation. I was probably half right. I didn't want to think that perhaps the wind was shifting direction.

We began a slow climb up the 6% grade to Jubilee Pass, about 4 miles away. The road wound into the mountains, and it was absolutely stunning. As I pulled a away a bit, shedding my jacket, a passing car honked and slowed next to me. It was Dave!

He had very wisely turned back at the entrance to Artist Drive, about 8 miles before Badwater. It had taken him an hour and a half to get there, and he thought that was just stupid. So he turned back, covering the return trip in half an hour (tailwind, you know), took a shower, got French toast at the 49'er, packed up for our departure tomorrow, then decided to drive out to find us. It was great motivation to see him. He waited at the turnaround point at Jubilee Pass, and we both cheered Jill as she came in just behind me. 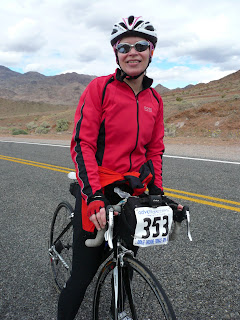 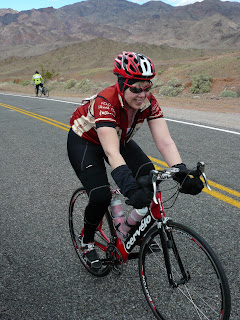 Karen and Steve, volunteer's we met at last year's event, were there for support again, and we chatted with them briefly before turning around. Karen mentioned something about the winds often changing direction, and I thought she was kidding but she looked kind of serious. 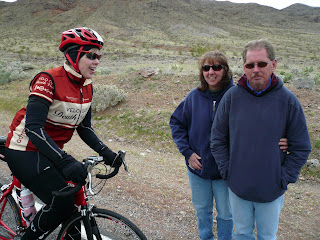 Without further delay, we said our goodbyes and told Dave that we'd see him in 2 hours back at the Ranch. It had taken us 5 hours to get to the turnaround point.

The descent was fast, with a few crosswinds thrown in for fear factor, but the view was unbelievable. A quick stop at Ashford (now checkpoint 3) and we were off again. 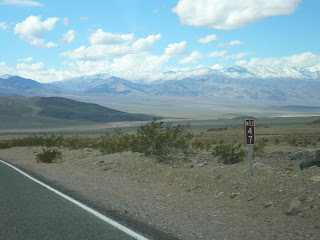 Averaged about 21 mph for the next 10 miles. Had the good fortune to hook on with a couple of younger guys who worked with us in a paceline. They were too fast, though, averaging 27+ mph, and we backed off the pace because we still had 30 miles left and needed to conserve our energy.

Jill and I were in better spirits - chatty, happy, prematurely congratulation ourselves for sticking with it in spite of the atrocious wind. The universe was smiling down on us.

And then we got to Mile Marker 24.

The road follows the contours of the mountains at the level of the salt pan, winding in and out with a regular rhythm that becomes almost predictable. We turned into the first of many inward-leading curves, and were slammed with a biting, cold, malicious force. The winds HAD shifted. The furies were once again unleashed. 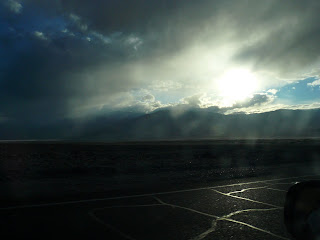 And just like that, our pace, our attitude, our desire to finish just kind of fell apart. We struggled like crazy for the next 6 miles, stopping every so often when we could no longer stay upright. At one point, Jill, in a head-down tuck position, hit another cyclist who was just standing in the road. She went down, but was unhurt - just rattled. We were out in the middle of the desert. There was no cell service, no SAGs in sight, and many miles of pain to endure until we could call it quits.

6 miles to Badwater, 18 from there to Furnace Creek - but it could have been a million. At the pace we were riding, that meant about 3 more hours on the bike. Neither of us had the will to continue.

I thought of Dave napping in the warmth and comfort of the Ranch, and regretted my boldness in suggesting that we would meet him at the finish. So, while stopped at the top of a turn, with the wind screaming in my face and no one to hear me, I shouted at the top of my lungs, "DAVE!".

Jill mustered up strength from somewhere (her 'suitcase of courage', maybe?) to practically sprint the final stretch to Badwater. Lot of cyclists were parked there. Many had already abandoned the ride. Consensus was that everyone was struggling. As Jill said, wind is the great equalizer.

Chris, the guy who picked Dave up from yesterday's windfest, was at Badwater. He opted for the 100-miler rather than the Ultra (150 mile) route, saying that riding in this kind of weather was 'rather silly'. We told him we were done.

Now, how to get back to the Ranch?

The support volunteer told us the SAG couldn't take us, they were too busy picking up those in serious trouble. Oh, and there was no cell service in Badwater. Sorry.

Jill was shivering on the curb, totally spent. I grabbed snacks and went in shameless search of anyone who was going to FC - not because I wanted a ride, but just to get a message to Dave.

I found no one, but Jill did. The wife of a rider who also had had enough agreed to contact Dave when she was within cell tower range. All we had to do now was sit tight and wait.

Not 1o minutes later, Dave pulled up next to us in the Badwater parking lot. How's THAT for Radar Love? He didn't get the call (yet) that we needed rescue, he just had a hunch that we might want some help. Jill and I were in awe of our 'rescuer', and praised him lavishly as we crammed 2 bikes and 3 people into our rental Corolla. We drove the final 18 miles back without regrets.

Jill was nervous about Tim, still somewhere out on the 200-mile course. As soon as we were back at the Ranch, she jumped into her car and went out to find him. Dave drove back to Badwater to see if our boy Chris wanted/needed rescue (he didn't). I took a long, hot shower and was dying for a beer. 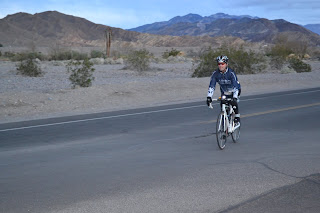 When Dave came back, we stood at the finish line to cheer on the intrepid riders who braved the final leg of this ordeal. It was maybe a bit less windy, but colder and getting dark. Most riders came in with their headlights on, including Chris. Jill and Tim drove up just before that. Tim was uncharacteristically happy to have been rescued, said he would have appreciated it 20 miles earlier! He put in 124 miles altogether (nice job, Tim!).

I think that maybe about half the riders who started actually finished, and most of those had probably considered DNF but didn't have the option. I was glad that we DID have the option. We had ridden 85 miles in just over 7 hours.

Anti-climactic ending for this day/trip: I got my beer and some grub, but by the time Jill and Tim were ready for a drink I was completely, stick-a-fork-in-me, wiped out. We said our goodbyes in the hallway of the hotel. Jill and Tim, it was awesome to see you again. Safe travels home, and we look forward to seeing you in Minnesota.
Posted by Cyclophiliac at 7:36 PM